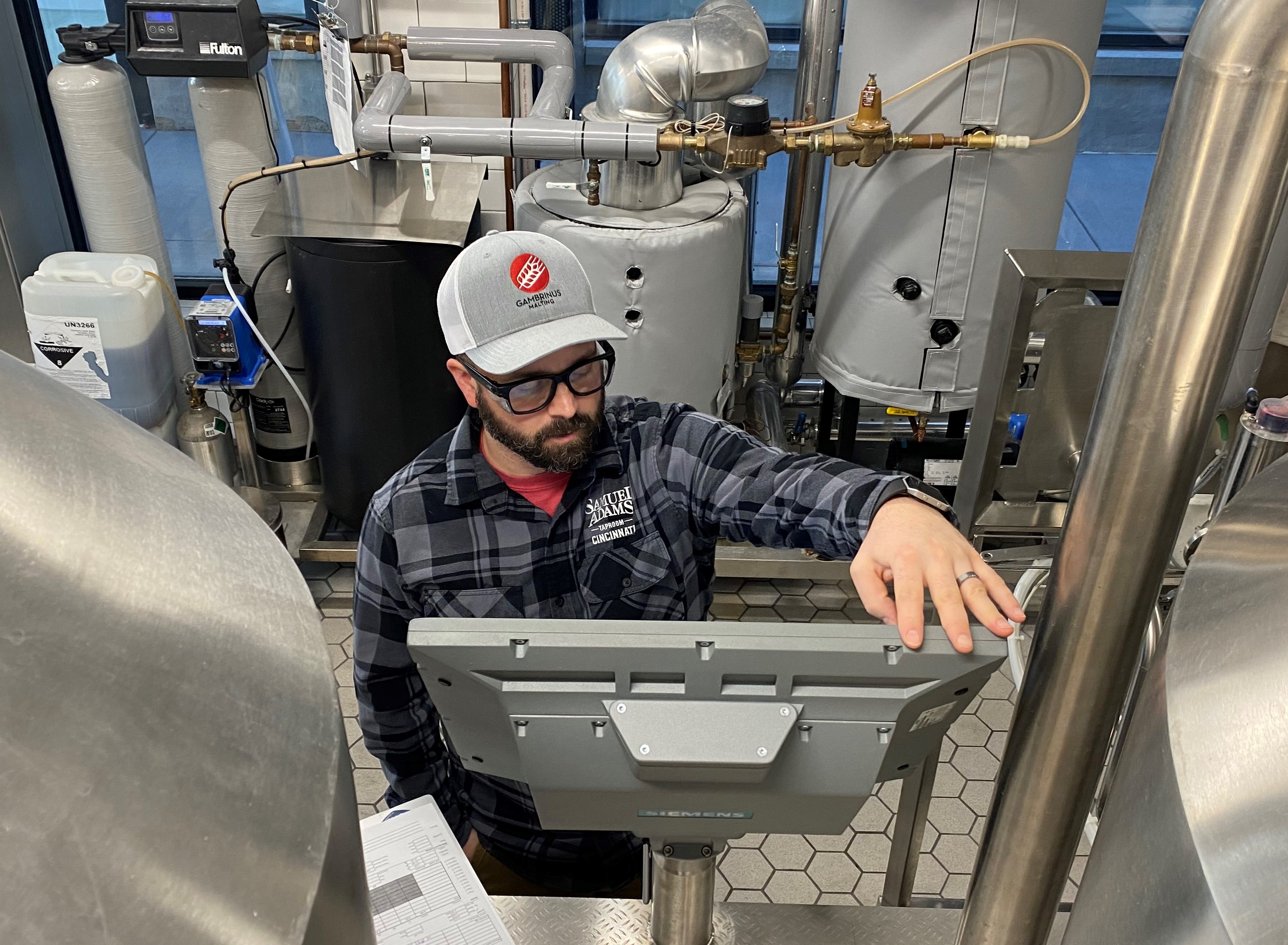 Meet Chris Siegman. Chris is the Samuel Adams Cincinnati Taproom Head Brewer and a member of the Boston Beer Research and Development team. Although the Taproom offers Samuel Adams staples like Boston Lager, seasonal styles like Cold Snap and  Octoberfest, and Wicked Hazy, we’re also the source of many one-off barrel aged beers and Taproom exclusive styles that are Chris’s creations. Both Cincinnati Lager and Uber Joose are two beers you will often find on tap at the Taproom and are good examples of the wide variety of styles Chris creates.

Chris, tell us a little bit about your brewing history in Cincinnati?

My brewing journey actually began when I randomly received a homebrew start up kit as a Christmas gift from my sister. I had always enjoyed craft beer and in college worked at a craft beer store in up in Michigan (this was a very new phenomenon back then). But until that Christmas gift I had never considered the possibility of actually making my own. Once I made my first batch I had officially caught the bug and it was all consuming. I joined a local homebrew club, the Cincinnati Malt Infusers, and they were a wealth of knowledge on helping me hone in on my craft.

After a few years of homebrewing I decided to take a leap of faith and leave my career to pursue an opportunity in brewing at Mt. Carmel Brewing Company. I spent the next four years there, brewing and learning (much) large(r!) scale production. I worked my way up to head brewer.

It wasn’t long after that  50 West Brewing Company was looking for a head brewer, so I jumped at the opportunity. It was a great experience,  managing two brewhouses and getting to expand my experience with a new barrel aging program, along with creating some really new and fun products.

Then came the opportunity with Sam Adams. They were opening a new Brewery/Taproom across the street from their production brewery. I was hired on to run the new state-of-the-art facility and work directly with the innovation team to create really unique, world-class beers. It’s an opportunity that I am so grateful for.

A lot of brewers often talk about brewing what they like to drink. What types of styles do you gravitate towards?

I am a firm believer in different styles for different occasions, and “variety is the spice of life!” lol. I think part of the fun of brewing (and drinking!) is the constant exploration.

For two years in a row now, you’ve been creating some beers that have been aged in Utopias barrels. Can you tell us a little bit about this? (Maybe tease what’s in the works for this year?)

Yes, one of the many perks of working at Sam Adams is the access to Utopias barrels. Utopias is such a unique product and so being able to work with these barrels and age beer in them creates some really unique complexities and flavor profiles that most brewers don’t have the opportunity to do.

And I am very excited about this year’s Utopias barrel release which will be Chocolate BockTopias. We feel that Sam Adams’ Chocolate Bock would be the perfect beer to go into Utopias barrels. I believe the Utopias barrels will add a really nice depth of character (maple, cognac/sherry) to a nice big silky and rich chocolate forward bock.

Is there a beer you’ve brewed you’re most proud of?

For all of the crazy beers I have brewed at the Taproom (Fresh Pops series, Just tap It in, Raspberry Sherbet IPA, etc.) and the constant exploration to blend styles with twist on ingredients I still think I am most proud of Cincinnati Lager. At its core it is an easy drinking lager with very bright citrus hop character. This beer has gone through multiple iterations to get to where it is at and is as close to my vision as any beer I have created. It was founded on my vision of a traditional German lager to represent Cincinnati’s deep German heritage but with a twist of some newer hop variety additions that nod to the future of this city.

Any collaborations or special projects you’re really excited for over the course of 2021?

Besides letting the cat out of the bag with Chocolate Bocktopias? Lol. Yes I have a handful of off the wall barrel aging project that hopefully have drinkers re-imagine what a barrel aged beer can be, and lean towards cocktails vs the traditional -- say bourbon barrel stout or something. More to come on this!

As far as collaborations, I am in talks with a few this year that I am very excited about, but just waiting for the right time where we can safely meet up to make them happen.